Would you like to work with insects? Insect farming is a growing industry. Developed nations like Japan, the Netherlands and the United States of America are farming insects as mini-livestock because they are an efficient protein source to produce, have high nutrient value and can be used to improve future food security.

South Africa has a rich history of using lots of different edible insects which are considered by many as a cultural delicacy. Advertising has influenced us to perceive insects as disease-carriers and crop destroyers, however, it is important to learn about the positive impact of insects on people’s health and the economy. Insects play a large role in food security and nutrition, pollination, soil enrichment, and the green economy.

Bianca Mkhize has a Masters degree in Tourism and Hospitality. Through the North-West University Bianca is doing a Ph.D. on insect harvesting and opportunities in tourism. Her aim is to increase tourist experiences of insects in the North West, Limpopo and Mpumalanga provinces of South Africa by showing how these insects are known and used traditionally. She hopes that her research can increase revenue in rural, poverty-stricken areas and motivate communities to conserve nature. 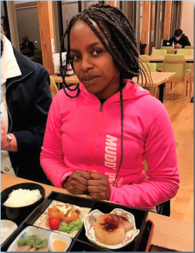 There are various career paths in the insect industry. Check them out below:

Ecotourism guides link visitors to the environment and to local communities through real-life experiences like collecting insects for food. This type of tourism ensures that people from different places can interact with each other and local people can benefit from sharing their traditional knowledge.

Environmental educators teach people (both children and adults) about sustainable use to ensure that the resource is not depleted. They would encourage farmers not to use harmful pesticides but rather bait pests from their crops. Homeowners can also make a difference by having the insect’s food plants in their garden.