The overall winner of the Hip Hop Science Spaza Competition 2014 is Atomic Combinations from Limpopo (Atomic Scientists from Mountainview Senior Secondary School). Each member walks away with an IFani CD and will get a chance of recording their songs for Science Spaza 2014 CD. 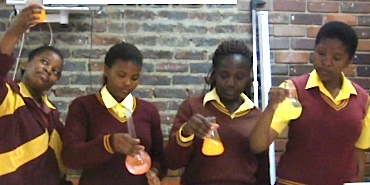 CONGRATULATIONS to ALL our winners!

The entries were judged on:

The judges consisted of both scientists, as well as a music communication specialist.

The winners and runners up will have their songs recorded for the Hip Hop Science Spaza album (with specialists who can sharpen their scientific content as well as the song/ raps themselves).

Start writing your science raps and watch out for the next Hip Hop Science Spaza competition!

The first ever Science Spaza newspaper was launched at SciFest Africa in Grahamstown in the week 11th to 14th March 2014.

The first issue of Spaza Space offers exciting news from some of the Science Spaza clubs, articles, cool competitions, new branded resources and much much more...

Here are some photographs of clubs who have already received their Spaza Space newspapers at SciFest. Other clubs will receive theirs in the mail soon! 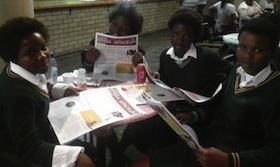 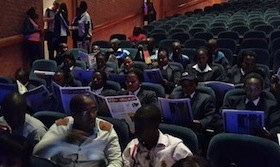 SciFest Africa is a national science festival which takes place every year in Grahamstown. Science Spaza made it's debut at SciFest Africa in 2013 and has grown since then to include over 40 science clubs nationally. We are hoping to reach more South African schools with the launch of Spaza Space.