“Sjoe! This has got to be the hottest summer I have ever experienced, and mind you, I have been living here since I was born. I’m telling you – this climate change is bad.”

Climate change is about more than JUST the weather. For example, has it ever occurred to you that climate change may have a huge impact on your health? Possibly not; you may have had to think a bit about that one. So how does climate change affect your health? Extremes of temperatures are obviously not good, and with climate change causing an increase in the average global temperatures, it’s definitely going to become much warmer. Continuous exposure to hot conditions can result in many heat-related illnesses ranging from sunburn to heat exhaustion, heat cramps, and the dangerous sun stroke (or heatstroke). While these may happen to literally anyone, the very young, the very old, individuals with underlying medical conditions, those with weak immune systems, and those who do not have proper clothing and/or housing, are at a higher risk. Higher temperature also result in an increase in air pollution and pollen, which could trigger asthma and worsen other cardiovascular and respiratory diseases.

Believe it or not, temperature extremes can have effects on your mental health too, which may eventually affect your work and relationships. It already sounds pretty worrying right? Unfortunately, there’s more. There are many indirect health effects of climate change as well. Weather-related natural disasters are on the rise. An increase in droughts will lead to unreliable levels of food production, leading to hunger and famine. Increase in floods will lead to local devastation and disruption, with injuries and death, and affected individuals will be exposed to unclean water sources. This will lead to an increase in infectious water-borne diseases such as bilharzia. The recent cholera outbreak in Mozambique, following Cyclone Idai, is just one, close-to-home example.

Insect and snail populations are also sensitive to climate change. Increasing temperatures would mean a wider distribution of vector-borne diseases (diseases which cause human illnesses, caused by parasites, viruses and bacteria carried by insects) such as malaria which is carried by mosquitoes, and possibly an escalation in the number of people infected. So yes, climate change will definitely impact on health. According to the World Health Organisation, climate change will result in approximately 250 000 additional deaths per year, between 2030 and 2050. These would be as a result of heat stress, malaria, diarrhoea, and malnutrition.

So the next time you are having one of those well-known weather conversations, don’t forget about all the serious health effects of climate change. Try to steer the conversation to ways that we as individuals can impact climate change – waste less food, switch to a more plant-rich diet, save energy in our homes and using public transport are just some examples. The group effort of small changes can make a huge impact. Let’s do our part in the fight against climate change.

Read the article and complete the crossword 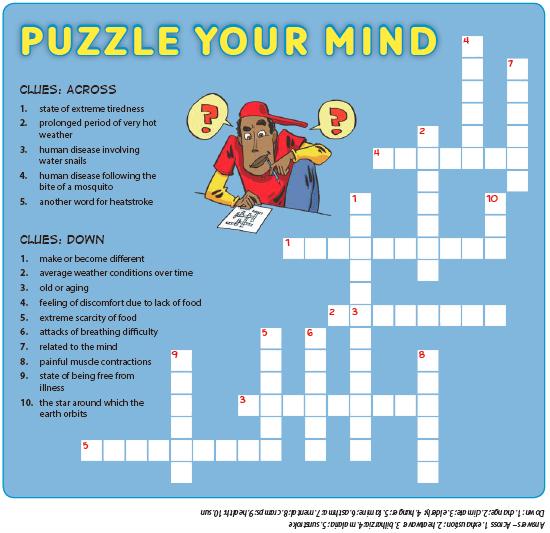 Thank you to SAASTA for partnering with us on this feature.